Are you considering breeding chinchillas as a hobby or to make some money? If you are, please read the following information (including the story). This information is provided to help you make an informed decision.

To begin with, in order to make money breeding and selling chinchillas you would need a herd of 100+ chinchillas. Some people supplement the income from the sale of the babies by selling chinchilla supplies and accessories. For most breeders, however, it is a losing game. Between the cost of the animals, supplies, cages and vet bills, most breeders never come close to breaking even. And this doesn’t even take into account the time required to properly care for and socialize a large number of chinchillas.

Another consideration is the toll, both financially and emotionally, that is placed on you when something goes horribly wrong with a pregnancy or birth. The following story provided by Peggy at Prairie Chinchillas is a perfect example of what can go wrong.


I am seeing that some people who are breeding now, don't want to realize that there really ARE consequences that can happen because of it. I thought I'd share this with the general forum, so people will realize we are not kidding about the risks that "can" happen with pregnancies.

Wednesday night, Rhiannon went out to dust the chins for me because I have been sick the past few days and didn't want to go in the chin barn. I hear the back door slam and she yelled MOM, COME QUICK, NOW! I got out the door so fast the only thing I thought to grab was a kitchen towel to put over my face. 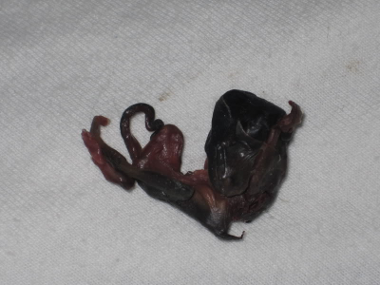 A mummified chinchilla kit.
When I got to the barn, there was a halfof a kit in the cage and mom with one stuck, breech (hind end first) hanging out of her, obviously very dead. I tried and tried to remove that poor little thing, and honest to God all I can tell you is it was like pulling taffy. No matter how careful I was, that little body just kept stretching and elongating. The smell was so bad, I thought we were both going to vomit, and mom was crying, no matter how gentle I was. I don't know how long the kit had been stuck like that, but she had zero contractions going on, and wasn't like that in the morning because I had run in quickly to do a visual check of all the cages (mask on) like I do every morning.

My regular vet, for the third or fourth time, was not doing evening hours and the place he recommended we go to I wouldn't take a dead animal, let alone a live one, so I went to a vet in Sioux City that I had used one time who seemed to really know her stuff. I didn't even get through to her, I got her answering system, and took off down the road, waiting for her to call back. It was an hour and 45 minute drive (time becomes important later on here).

We got to the vet and she tried and tried and couldn't get that kit out. She had to take a pair of scissors and slice him/her in half then work the head out slowly while mom was just whimpering in pain. The problem is, the head was in the birth canal, it HAD to come out and she wasn't sure she could reach it surgically. The smell was horrendous. It just permeated the room. The kits had obviously been dead in mom a long time. There was pus and blood all over the place. I have a strong stomach, I can watch pretty much anything, but when she got the scissors out I left the room. I was nauseated beyond words from being ill, then stretching that little baby out myself, and I couldn't take any more.

This kit died of injuries received during birth.
The mother needed touse her teeth to pull
the kit out of the birthing canal.
The vet ran an x-ray, wanting to be sure it was all cleaned out (she was going to flush her with saline solution after the x-ray) and, unfortunately, there was another kit, high up, that was also dead. She tried giving a shot of oxytocin, but if the kit isn't alive, it won't stimulate the mother's uterus to make contractions to push out, so even with the oxytocin, it was a very long shot. Needless to say, it didn't work.

Next step, surgery. She was going to try to preserve the uterus, but when she opened her up, a literal flood of pus and blood flowed out of her body. My girl got a spay instead. While during the surgery, doc found that her bladder was distended to several times its normal size. Apparently the kits were resting directly on the ureter, blocking all flow of urine. Since the kits were dead, they didn't move as a normal pregnancy would, and the urine just built up and built up. She told me if I had been a half an hour later, her bladder would have ruptured. I can't imagine the pain she would have been in and she would have died an agonizing death.

This was happening around 11:00 at night. We got home around 1:30 a.m. (I thought midnight, the child informed me differently) and had to get up at 5 a.m. the next morning for work and get the kids off to school, still being sick.

Luckily, so far (knocks wood) my girl is doing well. The vet was very worried that her bladder would turn into scar tissue when it shrunk back down and she would be unable to urinate, making all of this a wasted effort as that is not something that can be fixed. Thankfully, she is eating, drinking, peeing and pooping okay as of now. Her poos are a little small, but I think with the stress of all that happened, that's to be expected. She's here in the house with me, in a smallish cage, hoping she will rest and not stress her incision and her poor tired body. 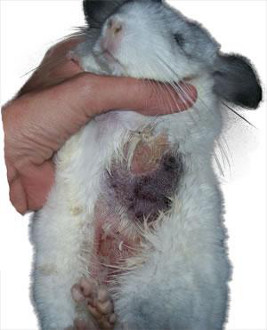 This mother has a severe case of mastitis.
$532.00 later, I have a lovely, big squishy girl here who will make a lovely pet. It's not cheap, it's not always easy. I put this girl at risk by putting her into breeding. It's something I don't think a lot of people realize can happen. This wasn't a first time mom either, this was an experienced mom who had given me a lovely litter before, and given litters to the person I got her from before me.

I'd like to say thank you to Blake, BTW, for getting his mom to run to the vet for me. When I flew out the door with chin in hand, the last thing I thought of was grabbing up food. I wanted her to stay at the vet an extra day so she could have subcu fluids and shots of Baytril for at least three days, but it would mean another four hours travel time to take food, then another four hours to pick her up, and I thought I was going to die if I had to make that trip again Thursday. I tracked Blake down (in North Dakota!) and he kindly asked his mom to go and give my girl her munchies. The vet called and was just ready to head out to Petco to pick up some pellets and hay. I said - noooooooooo. I will have food brought there. So, thanks Blake and mom!

This story is just one of the things that can go wrong when breeding chinchillas. A few of the others are: adult chinchillas or kits fighting and injuring or killing each other, the mother dying during the birth or pregnancy, still born kits, infections, etc. I have been breeding for 7 years and I have already had a chinchilla get her toe bit off by another, males and females fighting, a mother dying in the middle of the pregnancy, the kits from a large litter fighting and chewing on each other, over grooming injuries, a kit that had a huge hole in her skin that left most of her foreleg and shoulder uncovered, kits that seem fine suddenly dying, and 2 huge, stillborn kits (and I only have 13 adults that I consider my herd).

This page is included to help those interested in breeding to realize what they are in for. It’s not all fun and cute, cuddly babies. Think before you start. Can you find homes for all of the kits? Can you handle it financially, physically and most importantly, emotionally? If so, enjoy your new little friends.

Thanks again to Peggy from Prairie Chinchillas for allowing me to use this story.