The Meaning of TOV

Definition
TOV is an acronym for "Touch of Velvet". This is a phrase that originally was used to refer to a black velvet chinchilla, also know as the Gunning black or black. Now this phrase has come to mean any chinchilla that has the black velvet gene, regardless of the base color of the animal. 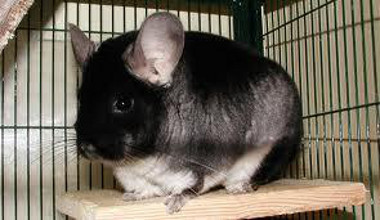 Characteristics
Black velvet chinchillas are standard gray chinchillas that have a mutated gene. This gene darkens the pigment in the tips of the fur (veiling) on the chinchilla's face and down the back and tail making these areas a deep black in color. The sides of the animal are gray and it is bright white on the belly. Originally, the fur of a black velvet was of a different texture than that of other chinchillas. It had a velvety feel and sheen to it. Over time, this aspect of the fur has diminished and is rarely seen.

Paw Stripes
Black velvet chinchillas often have dark stripes on their paws. This is sometimes referred to as "paw spats". These stripes are not proof that the chinchilla carries the TOV gene. Any animal that is well veiled can have paw stripes and not all black velvet or TOV animals have the stripes. The reason that TOV animals often have the stripes is because the gene darkens not just the veiling of the face, back and tail, but all veiling on the entire animal. 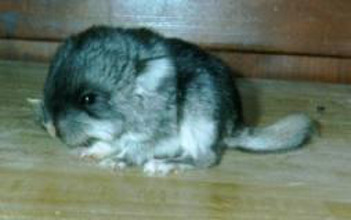 A black velvet kit.
This kit appears to be a standard
except for the dark rings around its eyes.
When black velvet or TOV babies are born, they may look quite different from adults of the same mutation. They can be born with nothing more than a dark muzzle and no other veiling. As they age, these kits develop the dark veiling, some to a larger degree than others. TOVs can also be born with black veiling covering most of the head or dark rings around the eyes. It can take eight to fourteen months for the chinchilla to develop its full color. Breeders can usually tell by the time the kit is six weeks old if it is a black velvet.

Crossing to other Mutations
As mentioned earlier, black velvets can be bred to other color mutations to create a hybrid color. The resulting animals have the base color of the other mutation but have the darker veiling on the face, back and tail. When crossed with beige, the result is known as a brown velvet or TOV beige. Other TOV combinations include TOV white, TOV ebony, TOV sapphire, and TOV violet. More than one other mutation color can be used resulting in TOV tan (ebony and beige), TOV ebony white, TOV violet wrap (violet and ebony) and so on. 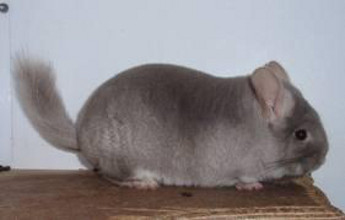 A brown velvet, or TOV beige, chinchilla.
Some combinations make it difficult, if not impossible to see the TOV influence. Colors such as white, violet, and ebony can totally mask the effect since white removes pigment from the hair, violet can affect the veiling, making the animal appear to be a darker phase of the color and ebony can be dark enough to hide it. Since whites are often bred to animals that are on the lighter side to keep their color bright, a TOV white may have little or no veiling, resulting in a chinchilla with a darker face but no stripe across the back. A TOV white may also have darker spots in the area where the dark veiling should be. For most of the colors, it is best to choose a mate that has dark, long, and even length veiling tips. This will make the TOV veiling look even and dark. Uneven tips cause the veiling to look choppy and short or light tips lighten the veiling.

Inheritability of the TOV Gene and the Lethal Factor
TOV in the name of a chinchilla means that it has inherited the gene from one of its parents. This animal can pass the gene on to approximately half of its offspring. The number of other color mutations in the animal does not affect this number in any way. Keep in mind, the TOV gene cannot be present in the homozygous state. This means that there are no chinchillas alive with two copies of the gene (one from each parent). This is because the gene has a lethal factor to it. Regardless of the base color, when two TOV chinchillas are bred to each other, one fourth of the babies are either never conceived or are reabsorbed by the mother sometime during the pregnancy. This is considered hazardous to the mother's health; therefore, responsible breeders do not breed TOV to TOV. Instead, breeding partners for TOV animals are selected from non-TOV chinchillas.

The TOV gene is considered to be dominant. A chinchilla that has received one copy of the gene will show its influence to some degree unless it is masked by ebony, white or sometimes violet.