Run around balls are hollow plastic balls of various sizes and made for a variety of small animals. They open on one end allowing the owner to place an animal inside and then seal the ball shut. The reasoning behind the ball is that it allows the animal to roam freely around the home without encountering any of the dangers running loose would provide. 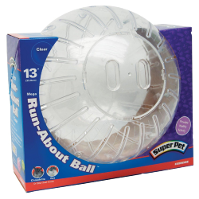 A plastic exercise ball.
Many chinchillas have died in them
DO NOT USE!
In truth, the run around ball poses even bigger problems for chinchillas than those that it prevents. The problems include size, movement, bodily functions, and most importantly, overheating.

None of the balls are big enough for an adult chinchilla and cause the animal to curve its back unnaturally while in it. This can cause back issues, especially for larger chinchillas. These issues often do not show up immediately, but rather take time to manifest.

Another problem is that these balls do not allow a chinchilla to move as they naturally would. Chinchillas do not run. They hop and jump; neither of which can be done in a ball. It is much safer and better for the chinchilla to allow it to run around in a chin proofed room for a short time than it is to put them in a ball. The room allows the chinchilla to run and jump as is natural for them without cramping them into a small, confined space. 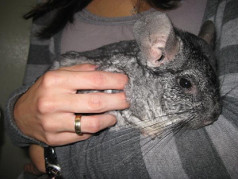 This chinchilla has overheated
and is in need of immediate vet care.
Additionally, chinchillas cannot control their bowel movements, causing them to defecate constantly. The feces, and often the urine, are trapped in the ball with the chinchilla. No animal would feel comfortable running around in such conditions.

Finally, and most importantly, these balls do not have adequate ventilation. When placed in these balls, chinchillas rapidly overheat and can die of heat stroke. Depending on the temperature of the room they are in and the activity level of the chinchilla, this can happen as quickly as just a few minutes. A good way of understanding what this is like for the chinchilla is to imagine being in a warm room, wearing a heavy fur coat, and participating in strenuous exercise.

Please, never place a chinchilla in an exercise ball!!!