Chinchillas evolved in an area that is cool and dry. The average temperature for the area is 65° Fahrenheit and little to no rainfall. Because of this, chinchillas do not tolerate heat and humidity very well and can overheat quite easily. When overheating, a chinchilla can suffer from heat stroke and die. Chinchilla owners should learn to recognize the signs and symptoms of overheating and heat stroke, how to treat either one, and how to prevent it.

Signs and Symptoms of Overheating 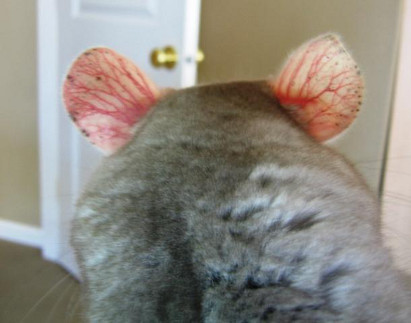 Red Ears are a sign that the chinchilla is to hot.

Treatment for Overheating
If symptoms of overheating are present, the chinchilla should be taken to a cooler area immediately or provided with a means of cooling itself down. Some methods include, but are not limited to the following:
Multiple methods can be used to help the chinchilla cool down. An example might be to move the animal to an air conditioned room and provide it with cool tiles or frozen water bottles.

Note: If a large enough bowl or basin cannot be found, the sink can be used in its place or the chinchilla can be held under the faucet, keeping its head out of the water, with cool water running over its body for 15 to 20 minutes 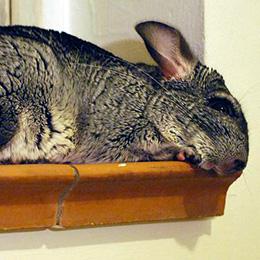 This overheated chinchilla is trying
to cool off by stretching out on
a tiled surface. Note the red
in the lighter parts of its ears
indicating that the chinchilla is too hot.

Prevention
Overheating and heat stroke are both very dangerous for a chinchilla and can happen quite quickly at temperatures that feel normal for humans. Additionally, chinchillas can overheat in temperatures that are considered safe if they are running, jumping, running on a wheel, in an exercise ball, or if the humidity is higher than normal. This can happen regardless of whether the chinchilla is out of the cage or running loose for playtime.