What to Expect from Your New Chinchilla

Bringing home a new chinchilla can be quite stressful for the animal. A new home, family, smells, sounds and often a new cage all can frighten the chinchilla and have a huge impact on the behavior of it. This can show up in a variety of ways affecting eating, drinking, crying and hiding. Several things can be done to help a chinchilla get through each aspect of this stressful time.

Crying
Often a new chinchilla will make a sound that seems very lonely and almost like crying. With adult chinchillas, it is a series of lonesome sounding sounds that start loud and diminish in volume. This is normally an attempt to call the herd. The herd may be the chinchillas or family it used to live with or its new family. If it is a young kit, especially if the kit was not weaned properly or weaned with other chinchillas and now is alone, then the chinchilla is actually crying because it is frightened. When the chinchilla does this, calmly talk to the chinchilla in a reassuring voice. Adults will usually stop once they hear your voice. Kits may need a little more reassuring. The calling and crying usually diminish over time. 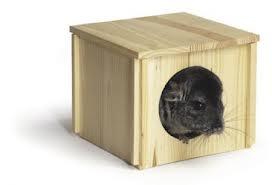 Getting to Know You
With a new chinchilla, it is best to give them a couple of days in which they are left pretty much to themselves. Clean the cage, feed and water the chinchilla as normal without trying to pet it or pick it up. Talk to it in a soothing voice while doing these things. After a couple of days, begin laying a hand in the cage, palm up. Let the chinchilla approach on its own terms. Eventually, the chinchilla will begin exploring the hand and arm. A small treat can be offered when the chinchilla comes to the hand. Do not offer treats to any kit under six months old. Instead, offer pellets, hay, or a chew toy. Small scratches can also be given at this time. It may take a few days or a few months for the chinchilla to learn to trust you. Younger chinchillas often learn to trust quicker than adults. Be patient and the chinchilla will come out of its shell given enough time and attention.