What is a Chinchilla? 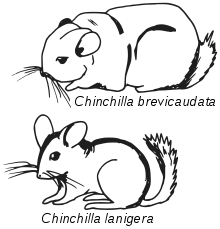 Chinchillas are small mammals from the order rodentia. The chinchilladea family contains two species of chinchillas (chinchilla lanigera and chinchilla brevicaudata) and the viscacha (Lagostomus maximus). Chinchillas are slightly larger than a guinea pig or ground squirrel, but appear much larger due to their thick fur. Chinchillas are crepuscular animals, meaning that they are most active during the hours before, during and after dawn and dusk with alternating periods of wakefulness and sleep throughout the day and night.

Both species of chinchillas are native to the Andes Mountains in South America; living in a cold, dry desert at altitudes up to 15,000 feet where they reside in the cracks and crevices in the rocky terrain. Historically, their range included the countries of Chile, Peru, Argentina, and Bolivia where they lived in colonies of up to 100 animals. In the past, reports of sightings of hundreds of chinchillas in one day were quite frequent.

Today, wild chinchillas are found only in Bolivia and Chile. C. chinchilla is currently extinct in Peru and Argentina and is facing extinction in Bolivia and Chile. C. lanigera has an estimated population of 5,500 in Las Chinchillas National Reserve in Chile and more exist outside the reserve in Chile. Attempts to re-introduce chinchillas into the wild have been unsuccessful. Both varieties are on the endangered species list with c. chinchilla listed as highly endangered and c. lanigera as vulnerable. Current laws in South America prohibit the capture and trade of wild chinchillas.

In their native environment, chinchillas have a very limited diet. Available to them are grasses, twigs, and cacti along with the occasional insect. For this reason, the chinchilla digestive system has not developed to cope sugars and fat leaving out items such as fruits, vegetables, nuts, seeds, and dairy from their diet.

Also in their native environment are various predators who feed on chinchillas. Some of these creatures include owls, hawks, and foxes. The foxes are not native to the area and were imported to South America for the purpose of hunting, a common past time for many people who came from Europe during the colonization of the Americas.

As a special note: many people believe that more than one breed of domestic chinchillas exists due to the different colors that can be found in the domestic population. This idea is mistaken. The colors are mutations of the original agouti coloring which is now referred to as standard gray or naturalle. All other colors are referred to as mutation colors or mutations, not breeds.